This just arrived in my inbox:

OPI announces the start of authorized e-commerce on ULTA.com. ULTA has been a licensed OPI salon account since 2000 and will be the first authorized account to sell OPI products online in the United States.
ULTA.com will carry the full OPI consumer product line, including the latest collection releases as well as over 200 classic nail lacquer shades, nail treatments, lotions, and certain manicure/pedicure tools.  The site will also offer some of OPI’s value-priced consumer promotions.
“ULTA has been a strong OPI partner for many years,” explains Suzi Weiss-Fischmann, OPI co-founder and Artistic Director. “ULTA caters to the fashion-forward and general beauty consumer. In today’s digital age, this audience is looking to purchase product with the click of a fingertip.
“For this reason, OPI has decided to retail online with one of our current partners. ULTA knows the OPI brand, and we feel ULTA.com will continue to uphold OPI’s commitment to providing the best in high-quality products. In addition to carrying consumer products online and in-store, ULTA will continue to offer OPI GelColor, the two week gel manicure, in over 500 full-service salons!”
OPI is available now on ULTA.com. For more information, please call 800-341-9999 or visit www.opi.com. Follow OPI on Twitter @OPI_PRODUCTS and become a Facebook fan!
###

I do apologize for practically disappearing.  Things have gotten so busy at work, and working with a toddler, though very gratifying, isn't the easiest thing to do.
Posted by Laura @ Sawan-Heaven at 12:26 PM 34 comments:

*~*~PIC HEAVY~*~* It has been many many months since I've posted. I would like to introduce our little boy!

After a rough start in 2012, we are very busy with our little guy.

Dominic's (Dom) Estimated date of delivery was March 28th, and everything we were told made us prepare for him to arrive in April.  Well my body and Dom had other plans.

He is getting so big:

So there is Dom!  Things have been busy not only at home, but at work as well.  I hope to be able to get back into my hobbies soon!

Thanks so much everyone!
Posted by Laura @ Sawan-Heaven at 10:56 AM 20 comments:

The New Year has started. Sad and Joyous.

I'm crying as I begin to write this post.

Things in my life have been so hectic and emotional since Thanksgiving.  My husband and I were in Disney World with my parents, my sister + her family and her in-laws for Thanksgiving.  Though we all had the best time ever in Disney World, my aunt was back in Louisiana with my 90 yr old grandma (MawMaw).

MawMaw fell and broke her hip the day before Thanksgiving, had surgery on Thanksgiving then went to rehab.  We thought things were going well until the Tuesday before Christmas she got an infection.  She was back in the hospital and stopped eating.  Eric and I were able to speak to her one last time before she went to sleep due to the medicine the doctors gave her.  We celebrated Christmas in the hospital on Christmas Eve and drove back to Houston that night.

As hopeful as I was when seeing her in the hospital, I knew that would be the last time I spoke to her.
MawMaw passed away December 29, 2011.

We went back to my Aunt's house in Louisiana New Years weekend.  MawMaw's funeral was scheduled for January 2nd.

New Years day Eric's and my dog Chip managed to get out of my aunt's house.  We looked for him for hours and put up lost posters.  We were so hopeful he would be okay because he always stays on the sidewalk.  One of my aunt's neighbors, a guy about Eric's age, just saw Chip walking past and yelled at me that he was right around the corner.

The neighbor darted around the corner for Chip, and probably scared him.  Chip ran out into the street and was hit by a car.  We didn't see him get hit, but the neighbor did.  Eric picked Chip up and his heart was still beating for about 5 seconds before he passed away in Eric's arms.  He passed away so quickly, but I'm glad he knew we were there for him.  Chip was our baby for 6.5 years, and we had to say goodbye so painfully quick and unexpectedly.
Chip passed away January 1, 2012.

It is still tough as it has only been just over 3 weeks and 2 weeks since I said goodbye to MawMaw and Chip.

Eric and I are still coping with Chip not waking up with us and always wanting to play each morning before we take off for work, and he would always wait on the stairs for us when we would come home from work.

Though that is tough and we are still heartbroken, we are looking forward to welcoming our first child.

His estimated due date is March 28, 2012.  We only have a couple of months left and are excited about his arrival.  We were taking weekly photos of my bump progression, but many weeks throughout the holidays were not taken due to other events.

I haven't painted my nails in a very long time as Eric has practically banned me from nail polish.  He is so worried about the baby being exposed even though I only use approved polishes.  :o/

I will be back soon. 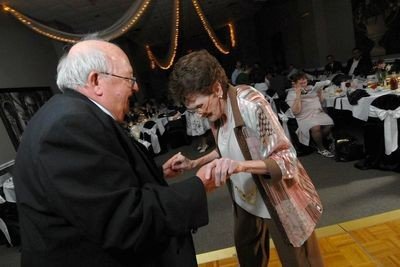 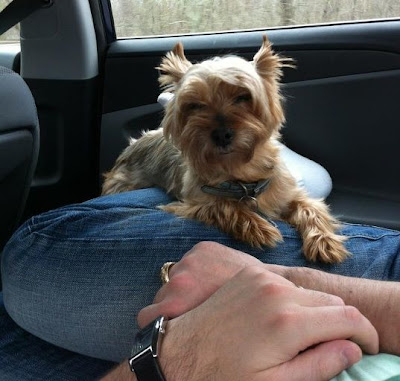 Our baby boy.  This lucky charm is due in March. 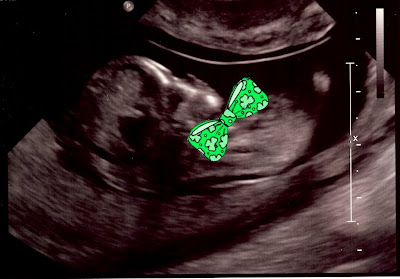 Won't you take me to...Tinsel Town!

Hiya folks!  I tell you what, it has been way too long.  I haven't painted my nails like I love to in several months.  Exciting things have been going on in my life and my husband has been pushing me to actually get work done in our house.  I'll have a few photos by the end of the coming week of before and afters.
Anyhow.  I finally had the drive to put polish on my nails.  It is either summer or winter here in Houston so I went with a winter-inspired look.
The two colors I used are Chanel Blue Rebel and China Glaze's lovely winter color, Tinsel Town! 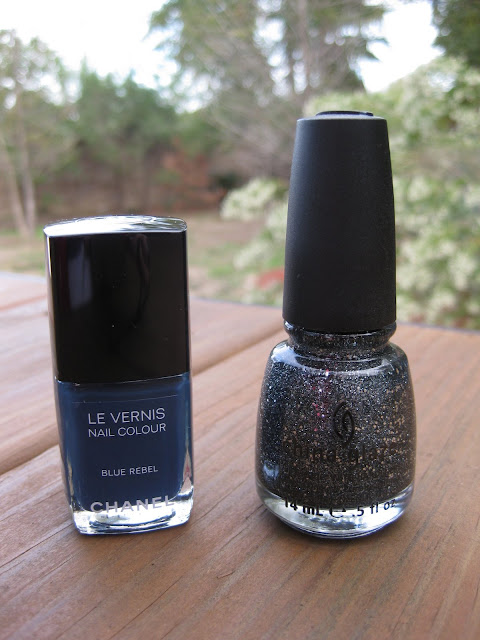 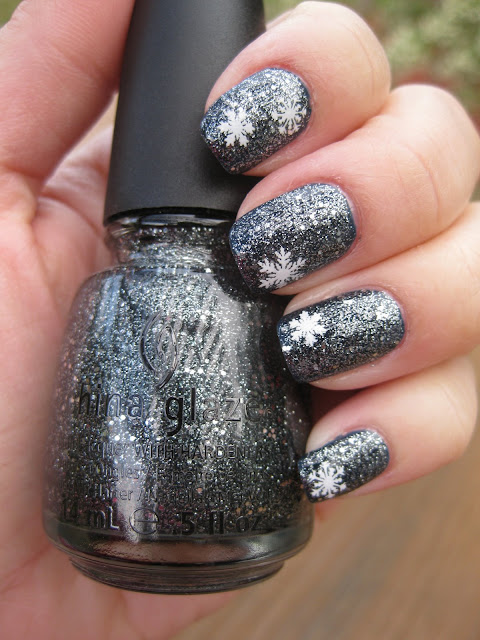 One coat of Blue Rebel with one coat of Tinsel Town. 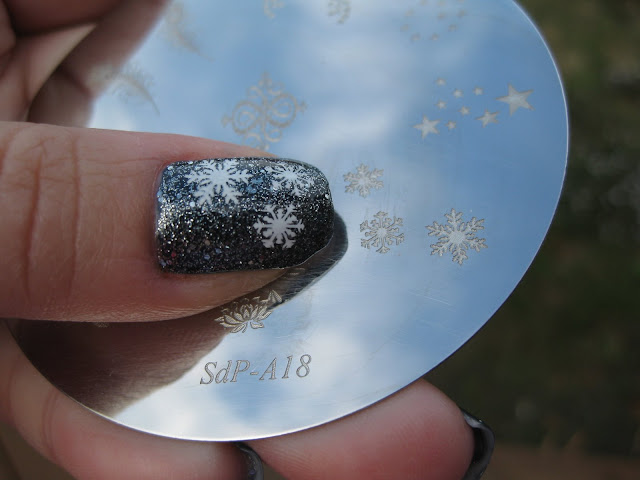 I used snowflakes from Dashica Beauty plate #SdP-A18.  I purchased this a very long time ago and I've noticed her plates are now rectangular.  She has a lot to choose from, and I originally looked into these plates because of the many different Sanrio characters she has. 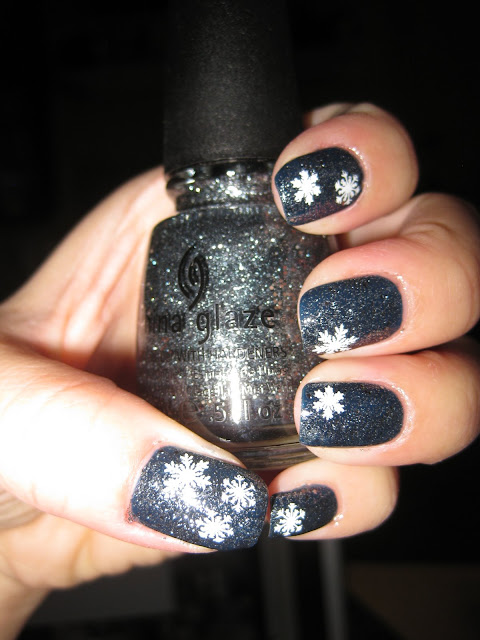 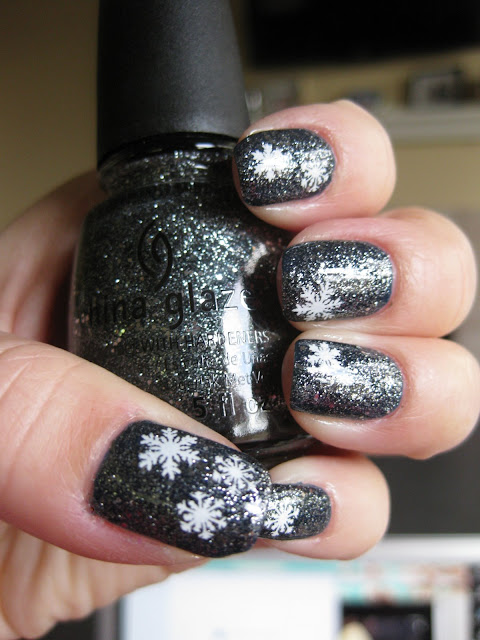 I will be back soon.  Have a beautiful weekend!
Posted by Laura @ Sawan-Heaven at 9:51 AM 10 comments: